Something I always wanted to try & I finally did..... 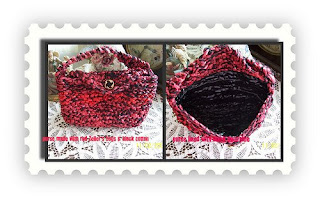 I don't have a set pattern for my bags I just make them up as I go along.... The red one I did cast on 24 st.... I use two large needles one being a lot bigger than the other just for effect... They called it Condo knitting when it was the rage...I knit it as deep as I would like & fold inside out & sew together with black cotton yarn..... I lined the red bag with black duct tape(you can get all kinds of colours at Canadian Tire).... You can see I ran out before doing the flap....Make the flap by decreasing 1 st each end of the needle....I knit handle by casting on 4 stitches & knit to desired length & then cast off.... Sew to the sides & voila a spiffy little bag/purse.....You can have a new purse every day of the week..... Eat your heart out Paris Hilton!!! 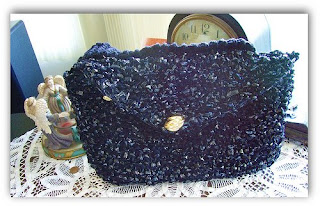 Purse made with VHS tape lined with Duct Tape 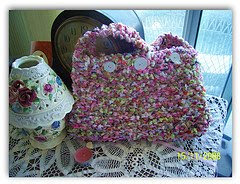 Purse made with grocery bags & ball of yarn

A break over Christmas afforded me some time to knit involving recyled material......The pink bag I looked up plarn on You Tube & learn't how to make plarn... It is so much fun & relaxing but time consuming......I don't like the crochet look so I used two different sized large knitting needles & mixed in an odd ball of yarn I had around never to be used.....I felt I needed to give the bag stabilty....Voila, I had a purse.....

I read that VHS tape comes up nicely & it surely did....... It is already cut evenly for you & is already on a spool..... How easy is that!! I added some cotton yarn in black for stabilty.... It left little openings as I used the big needles again & I didn't want things falling between the cracks.....I duct taped the entire inside with matching black duct tape.... The duct tape makes the purse stand up so nicely & nothing will get through that baby.....I didn't use the VHS tape for the handle as I felt it would be too rough on your hands but I double stranded some cotton yarn.
Posted by MKHOE at 14:26